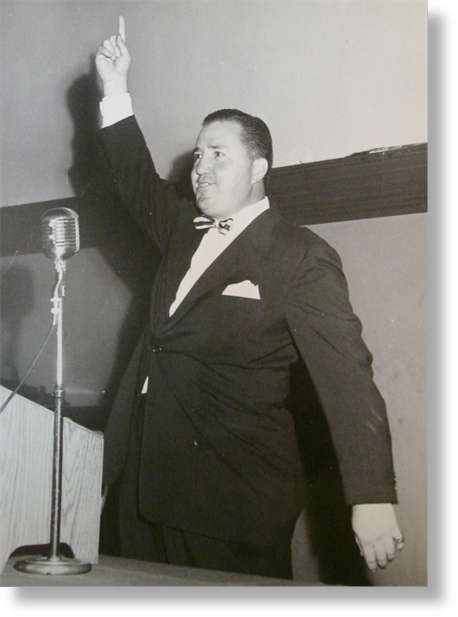 A native of Rochester, NY, Elmer Wheeler was a resident of Dallas, TX for more than 30 years and resided there at the time of his death in October of 1968. He died in Mexico City while travelling to Europe for his third speaking tour. He was a graduate of Utica University, Utica, NY, and was known nationally and internationally as "Mr. Sizzle" and the greatest sales person in the world.

Wheeler spent 10 years of his life selling newspaper ads. He started as a reporter but lost his job during the Great Depression of 1929. His boss said all he needed were salesmen. Subsequently, Wheeler declared, "I am a salesman." This was the beginning of his selling career.

Wheeler was skilled at creating newspaper ads for retail merchants. After his customers complained that his ads generated traffic but no sales, Wheeler visited his client's stores during a promotion and noticed that none of the sales people in the store knew how to sell. Wheeler began experimenting with devising word combinations that make people buy. This led to the creation of the Wheeler Word Laboratory, the first and only business wherein spoken words and sales techniques were developed and tested.

He expounded an idea of "Tested Selling Sentences" "Don't Sell the Steak--Sell the Sizzle" was the wise crack he transformed to a business philosophy that lead to the creation of a word laboratory known as "Sizzle Labs," to weigh and measure the relative ability of words to motivate people.

As a speaker, Wheeler won the first and only Oscar ever awarded a public speaker. In the Dallas Cotton Bowl, he drew 20,000 salesmen, bookkeepers, secretaries and others to learn how to make more friends and sales. He had lectured for more than 50 American Sales Clubs, the Jaycees and chambers of commerce.

As his speaking engagements doubled, so did his weight. On a self-imposed diet he lost 40 pounds, and wrote "The Fat Boys Book," which according to Newsweek and Time Magazines, started the present male dieting spree.

He received 2,500,000 letters from the newspaper syndication of "The Fat Boys Book," which immediately doubled his speaking engagements. He regained the 40 pounds and had to write "The Fat Boy's Downfall."

As a hobby, he entered the travel field, then wrote "Around the World with Elmer Backwards--or How to Haggle in 17 Countries."

Wheeler had been a member of the New York Sales Executive Club, Dallas Athletic Club, American Society of Travel Agents and the Dallas Jaycee Oldtimers. He served as Marine Captain during World War II.

As a final tribute to Wheeler, Ogelthorpe University has put his first book, "Tested Sentences That Sell" into their time capsule for posterity to be read 6,000 (yes 6,000) years in the future.

A bibliography of Wheeler's sales related books can be viewed HERE.

The facts herein are taken from the obituary published in the Dallas News on Oct 31, 1968.